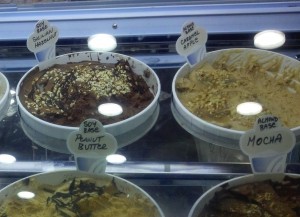 We often hear from people who say they want to go vegan, and they get it on an intellectual level, since plant-based eating has been shown to be good for body (health), mind (function) and soul (ease), but their various cravings won’t allow it.  Among the most-cited can’t-live-without foods is ice cream, with its yummy sweet cold creaminess — for many it is a must-have treat.

Well, good news!  DF Mavens makes some of the best ice cream we’ve ever tasted — dairy or non-dairy — no cows involved.  Sicilian Hazelnut Truffle, New Orleans Salted Praline, Key Lime Creme, Mocha, Caramel Apples, and more.  Having tried many of  the various flavors at the Baltimore Natural Products Expo, made of soy, coconut or almond bases, we can unequivocally say that no vegan shall be deprived of ice cream nirvana henceforth.  Plus, they’re gluten-free for those who are off gluten.

Watch and learn a bit about the story behind the DF Maven deliciousness. Malcolm is the humble ice cream genius who now satisfies those of us who only eat plant-based diets.  With an advisory board that includes some top Who’s Who of Plant-Based Eating, they have made a product that even non-vegans will crave.

What’s even better about this product?  A portion of the proceeds goes to Mercy for Animals, an organization dedicated to preventing cruelty to farmed animals and promoting compassionate food choices and policies.

Let’s all scream for this ice cream!