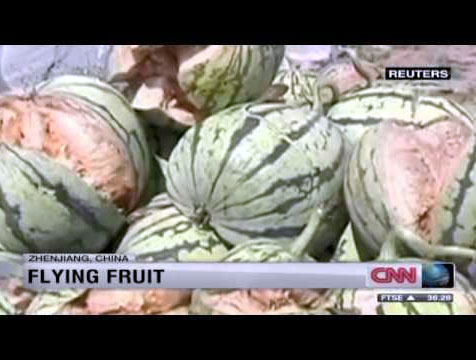 What is causing the rash of melon explosions and the horror faced by Chinese melon man (this poor soul couldn’t bear to check them it was so painful)? Should you be concerned?  Don’t worry- the little old lady does get to make some watermeron pickre (watermelon pickle) with the exploded bits.

This story was reported along with news that the Chinese government is trying to shore up its image as lax when it comes to food safety.  Or beyond lax.  Anyway, nice to see the Chinese are wanting to be getting tough.  Though, if they were REALLY wanting to make a point, then we’re due for a couple more executions.  Remember when the Chinese equivalent of the head of the Food and Drug Administration (FDA) was beheaded over meramine in mirk (melamine in milk)?    Now that’s serious (don’t worry Mr. Vilsak, we just indict here). Anyway, we can only hope that there’s some progress so that Chinese farmers and producers understand that selling dangerous food is not acceptable.
It isn’t clear whether our U.S. grown “conventional” melons (what a bad name – let’s just call it what it is – sprayed, treated, genetically-modified, etc. aka poisoned) have similar growth-enhancing chemicals used upon them.  And it’s too early in the season to tell if we’ll have a full-on melon minefield in the USA.  As for us, we prefer our melons closer to home and organic.  Organic, so far, is reasonable assurance it’s not been chemically enhanced (fruit botox anyone?).  One day, we’d even hope to grow our own.
In fact, we’d actually like to see some explosions ourselves – it sounds pretty cool in action.  But, unless we get lucky, we’ll just remember: the lesson from the produce blowups is to pay attention to where your food comes from.  Consider the source.
Prev post