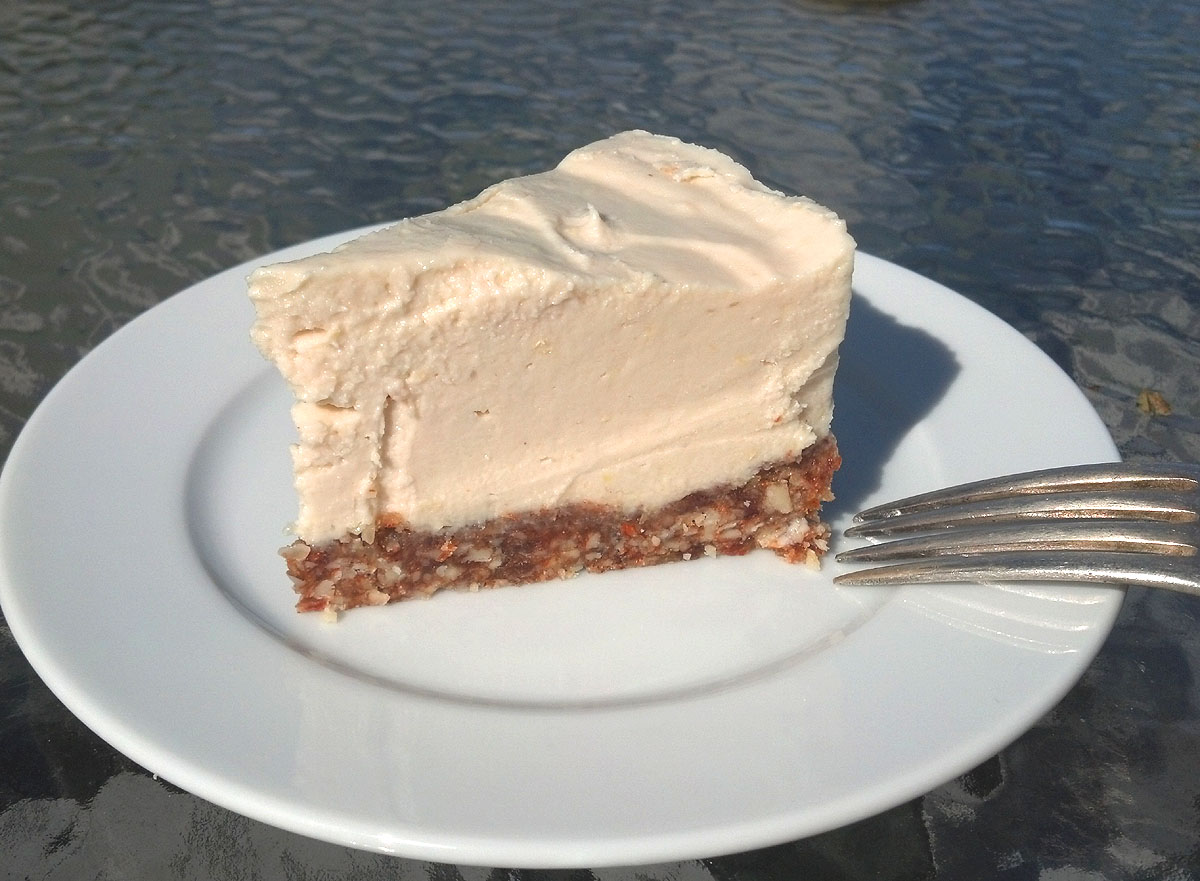 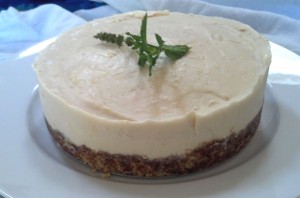 Before we went off all animal products, cheesecake was one of those very rare treats, a fleeting indulgence to be savored.  This vegan version, adapted from Artisan Vegan Cheese by Miyoko Schinner, is easily as yummy, even for dairy lovers.

Make no mistake, it’s quite rich, so it’s a special occasion treat. The recipe  requires multiple steps, but they are worth it for that extra festive glow.

The difference between this vegan “cheesecake” and the many others you’ll see is the cultured cashew cream cheese, which creates a tangy flavor profile just like dairy cream cheese.  You can make a fruit topping as well (cherry, strawberry, raspberry, etc.) but it’s also delish just plain. 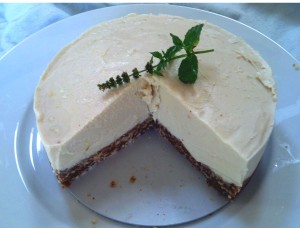 This scaled-down version serves about 8, which is still plenty and uses a 6” cheesecake pan.  Miyoko makes a big cake (16 servings), which is way more than we usually need.

Our recipe also keeps the agar (a thickener) down to a minimum because who wants a cheesecake that’s too gelled?  We hear you can also use some coconut oil instead of any thickener (making it fully raw since no water need be heated) but truly, that’s just extra fat that’s isn’t needed for flavor or texture. If you try it out, report back, please. 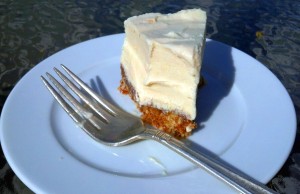 1 Lemon – Grated Zest and Juice of 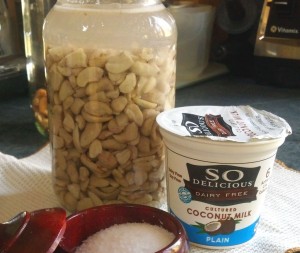 HOW TO MAKE IT:

Soak 2 cups raw cashew for 8 hours (overnight is easiest) and drain.  We use cashew pieces rather than whole cashews since they are less costly since we are blending them anyway. Place in a blender with the ½ cup water, 2 tbsp. non-dairy yogurt (we use So Delicious Coconut-Based – Plain) and a pinch of salt.  Blend until smooth and creamy and pour into a clean glass bowl or jar.  Cover with a clean cloth and allow to culture on the counter-top at room temperature for 24-48 hours.  The warmer the room, the faster it will culture.  Taste after 24 hours – when it’s finished, it should be tangy, just like dairy cream cheese.  At this point, you can use immediately in your recipe, blend with herbs for a cream cheese spread, or store in the refrigerator for a week or two until ready to use. 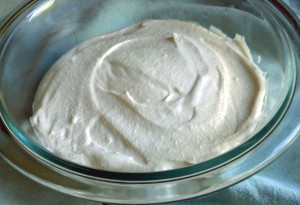 Place the almonds in a food processor and process until almonds turn into a fairly fine flour.  Add the dates and vanilla and process until thoroughly blended.  The mixture should be sticky.  Spread in the bottom of the cheesecake pan and press with your fingers until evenly distributed.  It will be about ¼ to 1/2 inch thick.  For a thicker crust, increase the quantities of dates and almonds.  You may substitute other nuts too such as pecans, macadamia, etc. 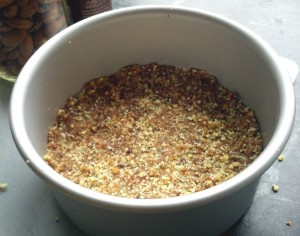 Combine the cashew cream cheese, sugar, maple syrup, lemon zest and juice and vanilla in a food processor until smooth and creamy.  Leave the mixture in the machine.

Bring the ¼ cup water to a mild boil and mix in the agar flakes.  Stir until completely dissolved, about 3 minutes.

Add agar to filling in food processor and blend until creamy.  Pour mixture into cheesecake pan and smooth the top. 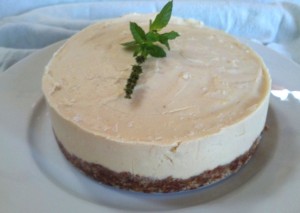