Should Aliens Keep Humans in Crates for Their Juicy Meat?

There is sooo much talk these days about aliens, it’s clearly time to go beyond the standard they-are-taking-over the-planet meme (or have already taken it over, depending on who you ask).

Let’s get to the nitty-gritty details, like what aliens eat.  All species eat, right?  If they do, we can only hope it’s not us, but it certainly could be. Imagine human gestation crates, just like the ones pregnant pork pigs (who are kept pregnant/caged their entire lives – fun, we’re sure) “live” in.

That could be our fate if the aliens take a liking to our increasingly fatty population, no?  White girl bacon, yummy (love those Southerners – especially juicy bbq style)!

Like with those (bacon, ribs) pigs, who were in the news again today (Confined pigs, public debate) the USDA rep pretty much summed it up saying, crates or not, the pigs had “similar states of welfare in terms of physiology, behavior performance, and health.”  That’s government talk for “shitty either way.” 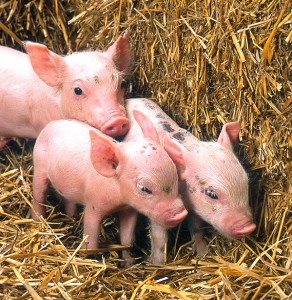 Now we might argue to the ETs that it’s an ethical, even intelligent, thing, that humans are special (a la Star Trek).  And, one should hope that truly evolved aliens would be intellectually, ethically and otherwise elevated, and that they would decide not to eat our most worthwhile species and gain sustenance some other way.

That said, we bet the pigs have the same hopes.

Radioactive Tuna on Rye? They Say It's Safe...