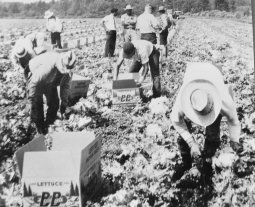 There’s a clever advertising campaign being pushed these days – NutrientsForLife.Org. Basically, it’s all about how important fertilizer is and how the public needs to be reminded about fertilizer because “too many people lack an understanding of crop nutrients and fertilizer.” Fertilizer companies are apparently feeling maligned due to “extremist groups,” so they wrote into the NutrientsForLife history and mission statement that “enough is enough” They’re kicking mad and dammit, you’re gonna love the stuff once you see the light.

Like all good PR efforts, they’ve got 5 “fertilizer facts” and are pretty effective in making anyone who prefers not to eat fertilizer sprayed food seem dopey. To us, it’s a little creepy, with tactics designed to confuse (such as making people seem ridiculous by wanting “crop nutrients” and not wanting “fertilizer” when the industry uses both words to refer to their product) or demean (clips that show people confusing fertilizer with pesticides or demonstrating their lack of scientific knowledge). Not to mention… uh, we NEED fertilizer?!

Um, haven’t they missed something? For thousands of years, it has been organic matter (not sprays and dusts) that feeds the soil which feeds the organisms that live there which feeds the plants which feeds the animals, who are often us. That’s why food from healthy soil is better for us and tastes better too.

Fertilizer, while it works for a bit, is kind of like a drug – you need to keep it up because when you stop you’ll notice things aren’t so dandy at all. We ask you to Wake Up. Go visit farms that use both methods and decide for yourself what you’d rather eat. In fact, rather than reach for the dust, take some responsibility and learn to nourish the soil, part of our amazing food chain.

It's On the Label, OK? Now Get Off Our Backs!