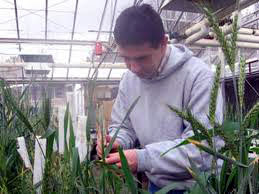 Is there anything new under the sun to say about genetically modified food?  Yesterday, one of our heroes, Marion Nestle, posted about GMO and we sensed an air resignation.  She said she rarely writes about this topic anymore (after 20 years) because there is so little new to say.

Hmmmm.  Actually there is something new to say, which is that the GMO products steamroller seems to be picking up speed.

Despite greater public awareness, and the health, environmental and other concerns that go along with it, the food industry is growing in power, not shrinking.  Purveyors of genetically modified products clearly have awesome lobbyists.  Look at the policies of this presidential administration and those before it.  Are they different?  Beets, alfalfa, no problem, really.  Fish?  Likely with “protections.”  And no matter what was said back in the days about wheat, it seems to be coming too.

Sadly, government has gone along with the “trust us”  pleas coming from the companies (and lord knows, they arent going to fund objective research) and has even gone as far as to buy into the nonsense that labelling products truthfully can be banned because it might make people think there’s something wrong with the stuff.  Gee, why would that be?

We have very strong feelings about what people are entitled to know about their food supply and the level of accountability public officials should be held to.  It is not enough to plant vegetable gardens and exercise.  We all need to wake up and speak up and take matters into our own hands.