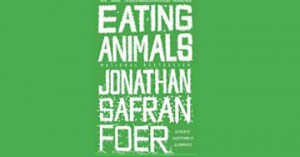 Jonathan Safran Foer apparently has a knack for turning people vegan.  (Natalie Portman credited him in the Huffington Post and we personally know others who had the same reaction).  Through his brilliant exposition on animal-eating (Eating Animals, Little, Brown and Company, Nov. 2009), he has hit a nerve in highlighting the connection between what we eat and the consequences it has for us individually and as a society.

We think Eating Animals should be required reading for everyone who works at any government institution that is in charge of overseeing, regulating (or not), and governing our food system. This includes not only the USDA, the FDA, the FTC and members of Congress, but also our judiciary and those hard working individuals at the state and local level who are closer to the ground where our food comes from.

Using facts and without hysteria, he has arguably already accomplished more than all the shock films showing horrid living conditions of “factory-farmed” animals.  His writing gift clearly amplifies his ability to get the point across. Perhaps the most radical idea that is stirred by Safran Foer is the laser-focus on the differences between how some animals are treated.  It begs the question why we do not offer meat-eaters eat surplus (and already dead) pets, including Fido and Fluffy, which could nicely address a meat-supply concern.  Now, while we would never do such a thing (we do not eat animals), one has to ask why pet cats and dogs have such an elevated status, being treated to medical care and careful diets, not to mention those cute little clothes now becoming more prevalent, while piglets, lambs and chicks are treated like inanimate objects?

We’re doubtful we’d ever eat meat but agree that we do not need any food police telling us to what to eat.  That said, we think we should move increasingly to an eat-what-you kill system.  Inconvenient?  Possibly, but we bet it would end the horror of today’s brutal meat and fish regime and most people would cut down if not eliminate meat.

Finally, we note that Mr. Safran Foer has provided links to some organizations for those who want to do more.  We pass them along in gratitude:  Farm Forward, Farm Sanctuary, Food and Water Watch, Food Democracy Now, Humane Society of the U.S.,       People for the Ethical Treatment of Animals, Sustainable Table.

Could it be the FTC's Getting Tough?