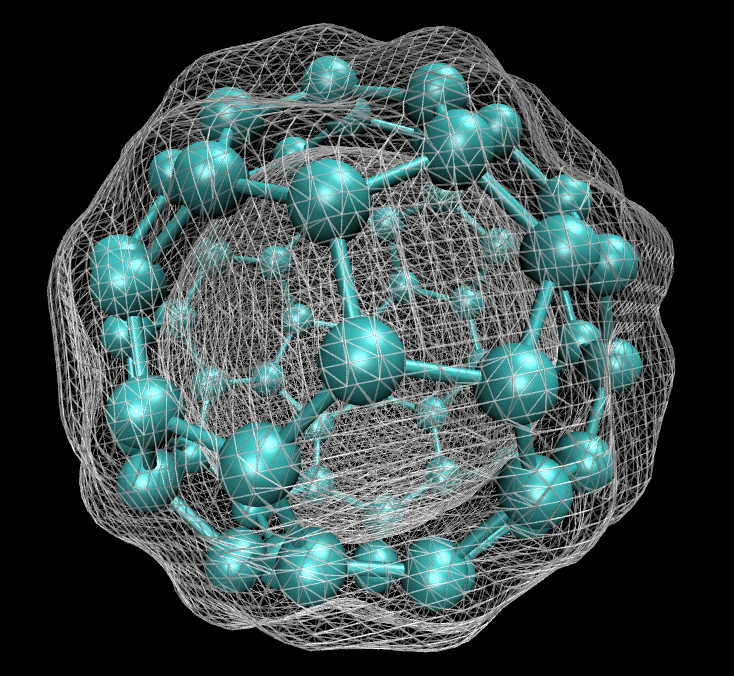 Is Nano-Tech a Ticking Time Bomb?

How Safe is Nano-Tech?

Nanotechnology is here. Nano operates in the Quantum Realm, where physics gets strange, the world isn’t always as it seems and particles can exist in two places at once. What you might not know is that it’s everywhere in products from food to makeup to clothing. Is nanotechnology a ticking time bomb? 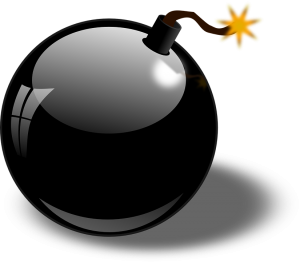 Nano is not like anything found in nature. Nano-particles cannot be seen, even under an ordinary microscope. Different chemical, physical and even biologic properties apply. Nano silver doesn’t necessarily act like non-nano silver. Nano calcium can act very differently than non-nano calcium. How exactly we don’t fully know because long-term impact studies have not been done.

Nano manipulates matter at the scale of atoms and molecules. Nano particles are much more reactive than larger particles of the same chemicals. Their greater availability and greater bio-activity can also lead to greater toxicity. This has huge implications for our health and the environment.

To be sure, nano-tech is attractive because it offers certain benefits. Computer chips, digital memory, display screens, and other products perform better now because they use engineered nano-scale materials. Shirts don’t wrinkle and hair stays shiny. Nano silver is being used extensively because it is believed to be antimicrobial. Medical treatments promise revolutionary results. These are the pros, but what about the cons, especially for us average consumers? 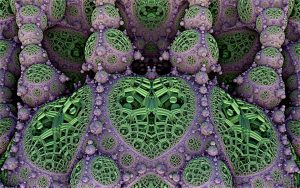 Nano Nano Everywhere
Whether you know it or not, the pervasive (and growing) use of nanomaterials in our food and product supply is one of the most revolutionary changes of recent years. The Center for Food Safety website has a database inventory of over 400 products that contain nano ingredients, and those are just the ones that have been confirmed so far. It’s not easy to know if you’re being exposed to nano-materials but with some vigilance, you can begin to figure it out. The CFS and others have cobbled together databases but only one database is from a government agency (in Denmark).

Testing for nano can be tricky since there are no globally agreed-upon standards about how to test for nano materials. This makes it hard to have a methodology that everyone agrees on and the industries that use nano do not seem to want to fix this gap. Concerned scientists and others have basically looked at ground-up products using electron microscopes, which is not an easy task.

In extensive research, lab tests of all sorts of food, candy, and other products (think toys, toothpaste, cutting boards, clothing, etc.) have found that a “startling number” of them contain nano ingredients. This doesn’t even include animal and pet feed. Nano is in food additives, flavor/taste modifiers, antimicrobials, packaging and cosmetics. Nano materials are being used to affect texture, shininess, and stickiness.

So what, you wonder, are the specific goods to look for? Products include food, accessories, health and beauty items, and packaging, ranging from plastic containers, coatings and other things that we are exposed to every day. Toothpaste, hair conditioner, sweets, beverages, clothing and more. In a test of a variety of consumer foods including candy, coffee creamer, sauces and others, all had some nano ingredients. Some ingredients are reliably nano, such as silica and titanium dioxide, so it’s safe to assume that if they are on the label, these too are nano. 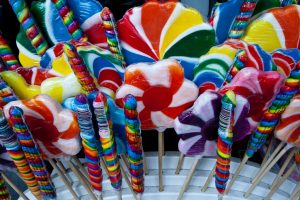 Where are nanos to be found in consumer products and what are they?

If that’s not enough to make you think about the nano world that we find ourselves submerged in, think about the fact that ingestion, inhalation and skin penetration allow nano-particles to go places in the human body that other matter cannot go. Studies show titanium dioxide crosses the blood/brain barrier and carbon nanotubes have been found in lung tissue. 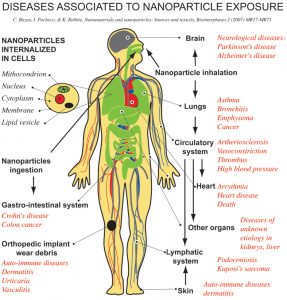 What’s clear is that nano materials can and do enter our bodies in unexpected ways, including into our digestive walls, lungs and other bodily systems with materials that the body may not be equipped to process. In studies of silver nano-particles, researchers concluded that due to their stability, nano-materials are anticipated to remain in the body and the environment for long periods of time and that even the limited data suggest potentially toxic effects.

Health concerns lurk everywhere since there’s been a real lack of safety testing. Studies have linked nano titanium dioxide with significant inflammation, and research has looked at the link to Crohn’s disease and immune system dysfunction. Some research has pointed to the ability of nano particles to re-awaken dormant viruses in the lungs, causing disease. Since nano particles are highly mobile in the body, kids are at serious risk given their increased sensitivity. Not only are nano-materials widely used in kids treats, children may be especially vulnerable as they are still developing. Yet, nano-materials are readily found in products targeting kids.

Environmental Concerns
There are also enormous environmental concerns as nanos pollute and alter our world. If we know little about the impact on human health, we know even less about nano in fertilizers and the impact on agriculture. A report by Friends of the Earth Australia, Way Too Little, is eye-opening. Ian Illuminato of Friends of the Earth has explained that we are “walking blindly,” ignoring the need for mature decisions.

This isn’t policy – it’s willful and reckless ignorance. Nanos have the potential to disrupt every corner of our ecosystem. The very ground we plant in is being restructured because of what’s happening with the application of nano fertilizer. Nano particles could even be in organic food depending upon how aggressive the NOPS (National Organic Program Standard) is. Nanos are so understudied that we don’t even know how to recycle them.

Who’s In Charge?
So far, the global impulse seems to be: See no evil, hear no evil, “It’s all safe since we haven’t proved that it’s not.” Regulators around the world so far have chosen to do nothing, despite early indications that nanos may actually be unsafe. If anyone is in charge, it seems to be the companies developing products for profit. In New Zealand, an independent report concluded “It would be precautionary to assume human dietary exposure may be associated with similar hazards as have been observed” in animal studies with nano-Ti02 [titanium dioxide]. Despite this acknowledgement, nothing has been done there or elsewhere to stop the nano flow and the public is still being  subjected to questionable exposure.

In America, there’s virtually no oversight or regulation by FDA. Incredibly, in the United States, we are even feeding infants nano-tech baby formula with no actual idea of what it is doing to them long-term. In a test of major baby formulas, they all contained nano-particles, including Gerber (Nestle), Enfamil, Well Beginnings (Walgreens) and Similac. The nano materials in baby formula actually have a needle-like structure when viewed under an electron microscope.

Now one might think this wouldn’t be allowed but the truth is the FDA doesn’t screen for the safety of these ingredients. These aren’t the same materials that used to be approved. Sure, the FDA may have approved calcium but nano-calcium? Nope. The European Commission has at least expressed concern about the use of nano-tech in cosmetic products so now just imagine the possible impact in baby formula, offered to our most vulnerable and sensitive population. Shouldn’t we know if these ingredients are safe? 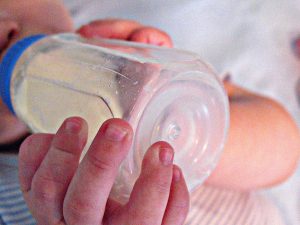 What’s crazy is that while the FDA does nothing, another branch of the government actually requires labeling when the ingredients are used in the manufacturing system, with required warnings so workers can avoid breathing particles, ingestion or skin contact. The EPA has been ordering at least a few products off the market if they haven’t been approved but the FDA is doing nothing, including ignoring research and the need for any funding for it.

Thanks to some vigilant public interest groups, some ingredients have been stopped, but not many. In May 2017, a federal appellate court concluded that the EPA unlawfully allowed a novel antimicrobial product used in textiles and plastics, stating the agency failed to show it was safe. The court cited the agency’s own Scientific Advisory Panel finding that nano-materials may enter “specific tissues, cell membranes or inside cells” and noting that their size means they can also act as “a carrier for other toxic chemicals.” Scary.

What We Don’t Know
As of now, public funding and research into the study of risks is declining globally. In 2012, the National Academy of Science produced a range of studies about what should be done about public health and safety. Nothing has happened since. At the same time, university research is being used to help commercial development of nano products rather than examine possible implications in a non-biased way.

Worse, if you try and find out about research interests, you may find yourself out of luck. FOIA (freedom of information) requests have actually been rejected because there were too many contracts between corporate interests and nano researchers. Governmental and academic industrial policy clearly supports nanotechnology and a general unwillingness to test. See no evil. 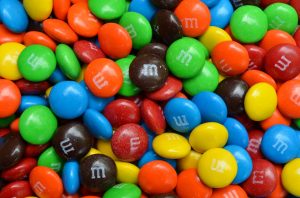 Fortunately, all is not bleak. Some companies have made positive commitments. Mega companies, perhaps burned by the GMO backlash, have staked out a positive position. Kraft, McDonalds, Dunkin Donuts and the Mars candy company have already agreed to take nano out of their food chains. They should be commended and others encouraged to follow their lead.

The growing public awareness about nano-materials has also started to affect certain products, such as sunscreen. Non-nano sunscreens like Badger, Trader Joe’s and others are available, as people wake-up to the fact that they are safer and more effective. Some cosmetic companies proudly declare themselves non-nano. We can hope that as with GMOs, public insistence will demand corporate action.

What Should You Do?

Educate yourself and seek transparency. Support companies that have committed to responsibility in labeling and manufacture. In addition to speaking out and asking companies about their ingredients (lots of companies have consumer hotlines), become a careful consumer.

Stay informed. Follow research and news developments or use a handy resource like, CFS, FOE or independent websites. Futureforall.org lists articles and research and offers additional detail about nano risks. Even government websites like NIH and others have information if you search.

Be a diligent consumer. Before you buy, you can check the CFS database: https://www.centerforfoodsafety.org/issues/682/nanotechnology#. You can also call the Consumer Help lines that many companies have — the contact number may be printed on the label or available online — and ask. Do your candy coatings use nano materials? If the company won’t disclose, explain that you won’t use the product unless they confirm it’s not nano.

If you want to avoid nano materials until they’ve been proved safe, there are other steps you can take to limit exposure. Certain ingredients are most likely to be nano so be on the lookout for ingredients like silica and titanium dioxide.  You can also looks for labels that say “Non-Nano,” which is nowhere near as prevalent as Non-GMO but is gradually catching on. As consumers wake up to what could be lurking everywhere, from the cutting board to bed-sheets, soup to dessert, companies are likely to respond.

Maybe nano materials are safe. Maybe not. But if we are being asked to make a trade-off for creaminess and shininess, we should know what we are being exposed to.