In Awe of Amazing Fungi 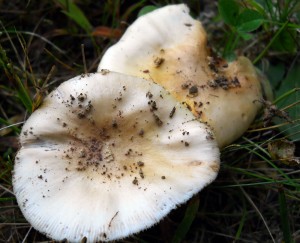 Fungi are amazing.  Putting aside the fact that they are an entirely distinct kingdom from animals and plants, they win the Largest Organism prize and offer a vast (largely undiscovered, by us anyway) realm of potential healing, nourishing, remediating opportunities.  Some estimates count at least 1.5 million species with only 5% classified.

An astonishing, mysterious kingdom, fungi include mushrooms, yeast and molds (but not lichen, which are basically a combo of fungus and algae).  Of course, without yeast, we wouldn’t have some of our most cherished consumables including bread and beer, and cheese would not be the same without its molds. Incredibly, 90% of all plants associate with fungus in the soil and 80% could not survive without their fungal partners.  Clearly, fungus are essential to life on this planet! 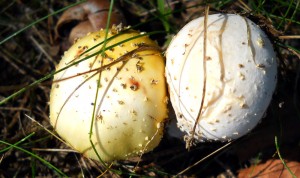 We recently received the 2012 Fungi Perfecti catalog and it made us desirous of way too many tempting books, spores, DVDs, and assorted paraphernalia.  We’re certainly not mycologists but we’ve had a relationship with a mushroom or two and some books are hard to resist.  For example, one promises tales of mushrooms that lasso their prey plus over 2000 color photos (The Book of Fungi by Peter Roberts and Shelley Evans – $54.95), and another discusses mycophilic (mushroom-loving) and mycophobic (mushroom fearing) cultures (Chanterelle Dreams, Amanita Nightmares by Greg Marley – $17.95).  And then there’s The Wild Vegan Cookbook by Wildman Steve Brill – $29.95.  The catalog also features various mushroom cultivation items that are pretty compelling too (if you’ve never had a log-grown shitake, you should make it a point to taste (grow) one – they’re truly delish!).

Mushrooms are often very high protein (for you protein-obsessed eaters out there – yes, we think Paleo man ate them and we know Ötzi the Iceman had a mushroom in his pouch) and are delicious, with their deep earthy flavors, especially varieties like the gourmet truffle (yum). 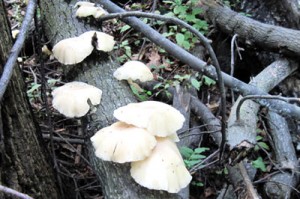 Of course, mushrooms are deadly, though some can heal, and some can help us visit other realms.  Fall is a great time to forage for mushrooms, and with luck, you will find two of our favorites – oyster and chicken of the woods.  Both of these are great for beginners because there are really no look-alikes. Not that we need to say this but please, do NOT ingest mushrooms (other than from those sold commercially) unless you know what you’re doing because if you confuse the wrong ones, you could “wake up dead.”

Wake up and learn more about mushrooms and other fungi. When you start to look, you will find fungi are pervasive and essential.

Saving Seed for the Apocalypse