Fancy Food 2012: Some Cool New Products and Lots of Snacks

This year’s Fancy Food Show, again in DC, was in many ways more of the same, with lots and lots of sweets (chocolate, cookies, candies), an abundance of olives and cheese and a few really cool new products. 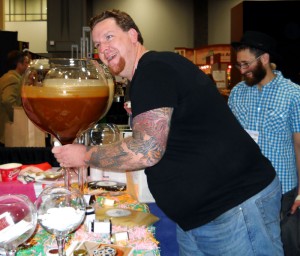 While we tried hard not to think about the obesity epidemic that is spreading throughout parts of the globe, it was hard to forget our compulsions.  Still, there was hope.

Our all-time show favorite was Rau Om’s misozuke tofu, which almost seems like it’s best described as “tofu cheese.”  It is creamy, complex and delicious as well as being raw, fermented, probiotic and vegan.  More to come on this one, including an amazing story involving recipes tracked down from ancient Japanese texts. 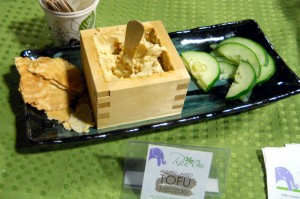 We also liked the Caveman’s “water kefir” beverage that is described as an updated kombucha by one of its creators.  Unlike the “booch,” it does not use tea as a base so it is caffeine-free and unlike traditional milk kefir, the “tibico grains” are not dairy based.  Its flavors include exotic tarragon, saffron and black pepper.  It was refreshing and low-calorie (considering). 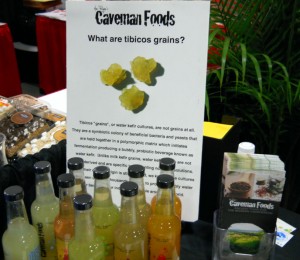 There were a few products a-little-on-the- scary-side  in our humble opinion.  How about caffeinated water?  Really?  That almost tops the “Making Fruit Easy” folks who have been around for a few years who say they “make fruit easy” by processing it and putting it in a squeeze tube.  Is that REALLY easier than, say, biting an apple?

As for trends, pigs were clearly in, perhaps reflecting the piggish nature of society?  Teapig.  Truffle pig.  How about corporate pigs greedily sucking our economic fabric? 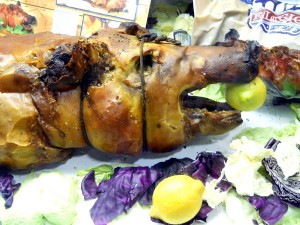 Another trend — olive oil in perfume-type bottles to spray away droplets at a time.  Forget Chanel No. 5, go huile d’ olive.

Kits were on the rise (aka DIY), including grow-your-own mushroom kits, make our own cheese,  pickles, pizza and other fare.  On the plus side, people may be more adventurous, ready to learn skills.  On the downside, do we really need a kit to do some of this?  Can’t we just use recipes and learn techniques like in the old days?

There’s more to come from the Specialty Foods world… stay tuned as we bring you more from the front.

Getting to Know 100 Trillion of Our Closest Friends