food for thought | skills worth knowing | wake up?! news & views

Beating Meat (No, not that kind).

Is Sustainable Meat Really a Myth?

A recent editorial in the New York Times by James E. McWilliams, author of Just Food: Where Locavores Get It Wrong and How We Can Truly Eat Responsibly discusses the idea that there is no such thing as sustainable meat, our visions of happy grass-fed cows living in harmony with our hamburger fantasies notwithstanding. Is this true?

By now, many people (maybe most) agree on the horrors of factory farming: rampant antibiotic use, mad cow, E. coli, etc., not to mention the painful cruelty throughout the life of industrial food animals which, even with “willful forgetting,” we know exists. We know that some food is creepy and can make us sick and that the entire industrial (factory) farming system is not sustainable.

Those of us who prefer not to be associated with industrial food, whether meat or not, have increasingly been turning (as much as is realistic) to food from smaller-scale, organic suppliers aka “sustainable food.” For meat, there even seems to be extra “sustainability” from the fact that the animals have better living conditions and suppliers use more humane slaughter practices, making for a nicer life, a better end… and perhaps even a tastier meal for us if the creatures received “upgraded” feed. 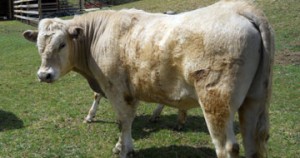 So, what’s the problem? The problem, according to McWilliams, is that basic economics will drive small meat suppliers to get bigger and ultimately, small meat farming will recreate what we have today – large, unsustainable, deadly, dirty, bad-karma industrial meat (ok, he doesn’t actually say that last bit – that’s ours, Ed.).

Now, even though we really try not to be too in-your-face about the need to beat meat (no, not that kind though that’s a perky mind for you), we agree that the question people should be asking is whether we should continue to pursue a meat-based diet at all. The evidence is clear that humans can live perfectly healthy, happy, full, and long lives as vegetarians, as hundreds of thousands throughout the world do, with less harm to the environment, our health, and multiple aspects of the soil/food/water web than the current meat-based diet paradigm causes.

Though McWilliams doesn’t mention it, we figure the same must go for fish too, which have also come to be called “sustainable,” either because they’ve been “farmed” i.e., bred in jam-packed tanks, or they’ve been “fresh caught” (whatever that means). At the same time, it’s not new news that we humans are well on our way to fishing-out the global water systems with over-harvesting and decimating entire species interactions, upending underwater ecosystems. Water pollutants, including from human and animal waste, don’t help with the fish forecast either. Not pretty.

While we haven’t yet read McWilliams’ book (so maybe we’ve missed his point) we are sure there is no need to be alarmed by this state of affairs even if true. Since we figure you’re only reading this article because at least part of you wants to explore a diet that is less meat-centric, we can reassure you that even die-hard meat eaters will enjoy a more plant-based diet. Veg food, like all well-made food, can be delicious, filling and nutritious. Plus, there’s the added benefit of sparing the lives of

So, to move to real sustainability, we have a few suggestions. By now, hopefully, you’ve started up a food storage practice, even if it’s modest, and this likely includes some staples like beans, grains, legumes and that sort of thing. Why not take a small step this week and find 2 or 3 of veg recipes you like and start eating them on a regular basis? You don’t have to become radical, meat-eater bashing, vegetarian activist (leave that to us – haha), just start beating meat.